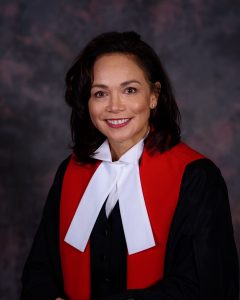 This week, the LESA blog is proud to feature Justice Johanna Price in our series showcasing the achievements of Indigenous members of the Alberta bar and bench.

Justice Price is a member of the Kitigan Zibi Anishinabeg First Nation. She was born in Buckingham, Quebec to a large multi-lingual and multi-ethnic family. Her father immigrated from Canton China, and her mother was of European and Algonquin First Nation descent.

From an early age, Justice Price’s background, life experiences, and passion to cultivate a fair and equal world motivated her to pursue a career in law. She came from an underprivileged background and wanted to help her mother and family while making a difference in the world. Her position as the youngest of five siblings, a female, and someone with a visible minority made her passionate about pursuing equality and fairness. At the age of 10, she was inspired to become a judge after seeing a documentary on Justice Bertha Wilson and the Supreme Court of Canada.[1] With this volitation and the love of her family, she focused her efforts on making this dream a reality.

In 1994, Justice Price received a Bachelor of Arts degree in political science from the University of Calgary. In 1998, she received her Bachelor of Laws degree from the University of British Columbia. After articling at McCarthy Tétrault LLP, she joined their litigation and business law groups. In 2004, she joined Peacock Linder Halt & Mack LLP as a civil litigator and became a partner in 2009.[2] For twenty years, Justice Price practiced as a lawyer before her appointment to the Court of Queen’s Bench (as it then was) on May 22, 2019.[3] She aspires to one day be sufficiently proficient in French to hear trials in French, and would like to learn her native language, Algonquin.

Justice Price is an active member in the Indigenous community. Throughout her career, she has strived to maintain and strengthen her connection to her family and community in both Alberta and Quebec.

She is currently a member of the Diversity, Inclusion, and Access to Justice Committee on the Court of King’s Bench of Alberta and is the Chair of the Indigenous Sub Committee. Justice Price is also a member of the Restorative Justice Committee on the Court of King’s Bench. These committees pursue among other things, Indigenous initiatives for the betterment of the judiciary and the Alberta people. Justice Price is also the chair of the Tsuut’ina Peacemaker Court Advisory Committee. This committee acts as a third-party advisory group to help ensure that the peacemaker court maintains its cultural uniqueness and restorative justice mission. In her personal life, Justice Price stays connected to her roots through regular visits to her Frist Nation, Kitigan Zibi, near Maniwaki, Quebec.

For those at the start of their career in law, Justice Price provides them with the following words of encouragement and advice:

“Be resilient, have courage, be brave, and follow the Golden Rule of treating others the way you want to be treated—always with respect and dignity.”

Many thanks to Justice Johanna Price for taking the time to do this interview, and for sharing her experiences as a member of the Kitigan Zibi Anishinabeg First Nation and Justice.

If you, or someone you know, is an Indigenous member of the Alberta legal profession, we’d love to hear from you. Please send us a note at [email protected].

[2] “Government of Canada announces judicial appointments in the province of Alberta,” online: News Wire (22 May 2019) [https://www.newswire.ca/news-releases/government-of-canada-announces-judicial-appointments-in-the-province-of-alberta-884963577.html].