LESA’s ‘New Wills & Succession Act‘ seminar in Lake Louise is sold out! If you were wanting to attend this program, please contact our office to be put onto a wait list. Please note, registrations are still available for our 44th Annual Refresher Course in Wills & Estates, occurring in Lake Louise from May 1 – 3rd. For full details on faculty members and topic descriptions, please click here to download a PDF of the brochure.

For more information on how this affects both students and alumni, visit the University of Alberta or University of Calgary for details.

The Council of the Federation of Law Societies of Canada has taken another step in the process of approval of new law degree programs in Canada by adopting the recommendations of a committee which reviewed applications from Lakehead University in Thunder Bay, Ontario, and Thompson Rivers University in Kamloops, British Columbia. The FLSC news release is here.

Are you, or do you know of, a dynamic and driven individual? LESA continues to search for an Associate Director of Regulatory Affairs. The successful candidate will bring a minimum of 3 years of experience in the fields of law or legal education as well as ties to the Alberta Legal Community or legal education community. For a full description and position requirements, please click here.

The Benchers of the Law Society of Alberta, at the February 3-4, 2011 Benchers meetings in Calgary, welcomed new executive and incoming Benchers. Doug Mah Q.C. (Edmonton) is now President with President-Elect being Steve Raby Q.C. (Calgary). New Benchers include Adam Letourneau (Lethbridge), who was appointed upon the resignation of Rod Jerke Q.C., and Dennis Edney (Edmonton), who was appointed upon the resignation of Harry Van Harten, now a Judge with the Provincial Court of Alberta. For more details on the new President, President-Elect, and incoming Benchers, be sure to check out the upcoming issue of the Advisory.

The U of A Law Show, an exciting event of raw talent, pop culture references, and a hilarious look at the life of a law student and junior lawyer, was a huge success!

With something for everyone, the annual show, begun in 1996, combines music, acting and dancing in a show that raises funds for local charities. The Alberta Council of Women’s Shelters has been the recipient for the past two years, with this year being its last of a three-year partnership. The U of A Law Show has already contributed $55,000 to the charity from the ’09 and ’10 shows. For the coming 2012-2014 shows, a charity will be selected by the student body by way of a vote. To date, the Law Show has raised a total of $230,0000 for various charities throughout the years.

This year’s show Draculaw, was held on February 4th and 5th and involved 130 law students in every aspect from acting and dancing to organizing rehearsals and song selections. If you missed this year’s show, be sure to watch for it in 2012! It is sure to be a smash hit.

Mark your calendars! March 15th, 2011 is the due date for declaring your Continuing Professional Development plan to the Law Society of Alberta. For more information regarding resources for the development and declaration of your plan, visit the CPD website. As always, the Legal Education Society of Alberta is here to meet your CPD needs. Visit our website for detailed information on all of our upcoming programs, or click to view our 2010-2011 Educational Calendar.

This conference brings together a wide variety of leading tribunal members, counsel and advocates exploring legal issues facing tribunals today and in the future.  Valuable for individuals who are involved with administrative justice boards and commissions!!  Speakers come from a wide knowledge and experience base.

The conference kicks off with Assessing Credibility of Witnesses.  Some of the other topics covered are:  Content of a decision, navigating a complicated tribunal process, and bias.  Dean Phillip Bryden wraps up the conference with Leading Cases from the Courts.

We received very sad news that Leonard J. Pollock Q.C. passed away last night. In addition to being a practicing lawyer, Len was an institution within the University of Alberta’s Faculty of Law for 30 years, a Bencher, and a LESA contributor. We sincerely appreciate Len’s service to our profession. He will be deeply missed. 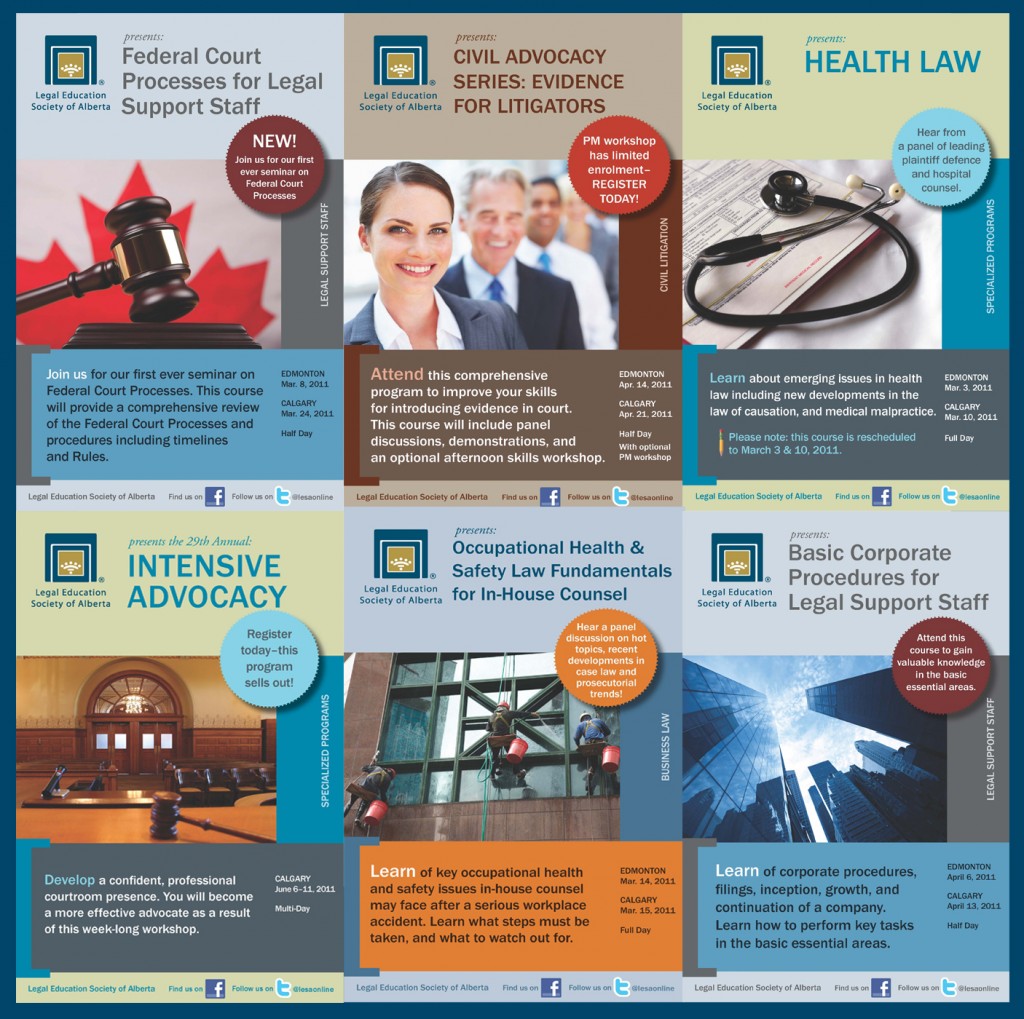 Watch for 6 new brochures to hit your desk this week!

We have incredible programming upcoming, with prominent practitioners on our faculty and topics that you will not want to miss. Register early for our Civil Advocacy Series: Evidence for Litigators afternoon skills workshop  – space is limited! And for the 29th consecutive year, we are offering our Intensive Advocacy course, which guarantees to leave you with improved skills. Space is limited for this multi-day program; contact our office today to secure your spot!

As noted by blogger Niki Black at Sui Generis, 2011 will bring rapid changes in the realm of technology for everyone, lawyers included. Lawyers, however, are a unique subset of the population, and as the trends indicate, lawyers use technology  differently.

As Black notes, lawyers will purchase technological tools that will enable them greater mobility and flexibility, predicting that by the end of 2011, most lawyers will own a smart phone. Those in large firms will maintain the conventional use of the Blackberry, while smaller boutique firms or solo practitioners will begin to shift towards the iPhone and other Android options.

The use of tablet computers, quickly gaining popularity in all fields, including the legal field, will increase throughout 2011. One of the big benefits of an iPad (or other PC-based tablet as often chosen by lawyers) is the ability to carry, read, and edit large files on the go. Not only does this mean less weight to lug around, but work can now be taken to virtually any location.

Social media is as prevalent as ever, with studies showing how micro-blogging on sites, such as Twitter and updating ones status on Facebook, have taken the lead in multiple fields. For lawyers, however, the use of Twitter is predicted to decrease throughout 2011 based on its change in usage. According to Black, lawyers are looking for ways to network, a function more aligned with Facebook, rather than the changing use of Twitter, which is now moving more towards information sharing. Blogging is predicted to be on the rise in law firms, not only for the increase it gives in search engine rankings, but also for its ability to showcase a law firm’s legal expertise.

Which, if any, technological trends are followed in your law firm? Which tech tools or social media platforms are you currently using? We’d love to hear from you!