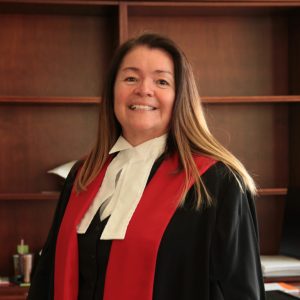 This week, as part of our series highlighting the achievements of Indigenous members of the Alberta legal community, we would like to spotlight Justice Cheryl Arcand-Kootenay.

Justice Cheryl Arcand-Kootenay is a Cree woman from the Kipohtakaw (Alexander) First Nation. She grew up on her First Nation with her community, parents, and family. She notes that her parents showered her with love and support and taught her the value of education and hard work. In junior high, she was inspired to pursue law after learning about the achievements of two Indigenous men—Chief Willie Littlechild and Douglas Cardinal. As a lawyer and architect respectively, their successes planted the seed that she could one day pursue her own dream to become a lawyer.

Justice Arcand-Kootenay succeeded in completing her Bachelor of Arts and Bachelor of Laws at the University of Alberta. After graduating from law school, she opened her own firm and began her practice in child welfare and Indigenous justice.[1] She is a mother to three adult children named Brett, Breanna, and Bethany, and is a proud grandmother to her grandchildren, Violet and Theo.

In November 2018, she became the first Cree woman from Treaty 6 to be appointed to the Provincial Court of Alberta where she presided over family, criminal, and civil matters. Less than three years later she became the first Treaty person in Alberta to be appointed to the Court of King’s Bench of Alberta.[2] She has completed her degree requirements for her Master of Laws in Dispute Resolution at Osgoode Hall Law School and will graduate in February 2023 in absentia. She is also considering pursuing a Doctor of Laws and aspires to one day learn a second language: her language, Cree.

Justice Arcand-Kootenay is an active member in her First Nation community as well as the legal community. She currently mentors Indigenous law students through the University of Alberta’s Law Student Association and has recently spoken at the Warrior Graduation Ceremonies for both the Buffalo Sage and Stan Daniels sites on behalf of the Court of King’s Bench of Alberta.  She is part of an email forum with all Indigenous Judges across Canada and was recently part of the Jury for the 2023 Indspire Award recipients.

When asked if she had any words of wisdom to pass onto newly called lawyers, Justice Arcand-Kootenay wishes to express her joyous congratulations to those who are newly called. She notes that being a good lawyer requires hard work, dedication, and a passion for the law. She advises that in practice, it is important to bring integrity, courtesy, and respect. She encourages newly called lawyers to reach out to colleagues for support and questions, and emphasizes that they are not alone in the practice of law:

“You are surrounded by intelligent, principled colleagues who will encourage you to excel. You will find reward in helping people and resolving conflict, and by being in the Courtroom. And in time, you too, will become someone’s mentor.”

She also offers an inspiring excerpt from a poem by Chief Dan George:

In the midst of a land without silence

You have to make a place for yourself.

Those who have worn out their shoes many times

Know where to step.

It is not their shoes you can wear

If you let it happen.

Justice Arcand-Kootenay remains deeply honoured to have achieved the success that she has in her career and continues to have a passion for the law. She hopes to inspire other Indigenous people to consider a career in law as well.

Many thanks to Justice Arcand-Kootenay for taking the time to do this interview, and for sharing her experiences as a Justice and as a member of the Kipohtakaw (Alexander) First Nation.