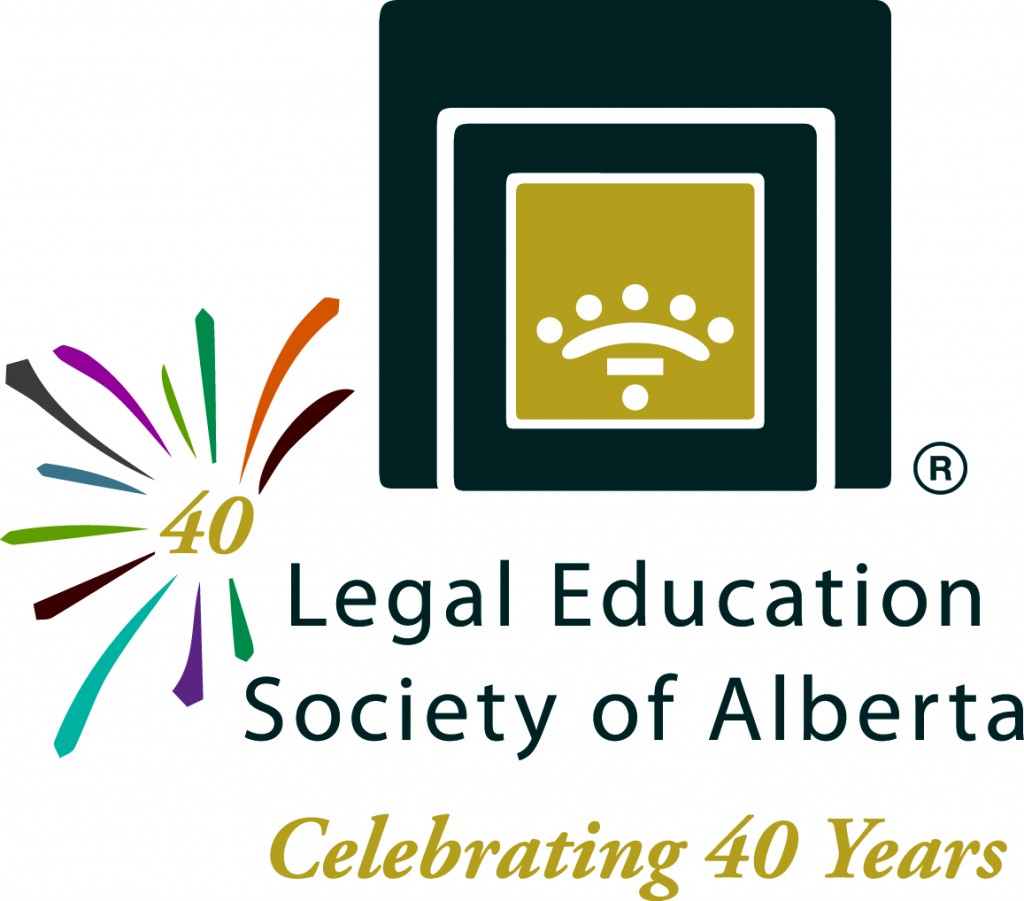 LESA is celebrating a special milestone today – our 40th anniversary as an organization!

The Legal Education Society of Alberta was incorporated as a non-profit society 40 years ago today, on November 19, 1975. Today’s blog will take you through a brief history of our first 40 years. Enjoy the travel back in time!

Peter Owen QC served as LESA’s first Executive Director from 1976–1979, locating LESA’s offices in downtown Edmonton in order to be close to those practicing in the profession. When William Galloway took the job of Executive Director (which he held until 1983), he worked to develop LESA’s connections in Calgary, where he was located. With offices in both Edmonton and Calgary, program responsibilities were divided between the two locations. Galloway was followed by Professor John Law, who held the office of Executive Director for 9 months. At this time, LESA moved its Edmonton offices into space at the University of Alberta’s Faculty of Law.

Next, in 1984, Hugh A. Robertson QC became Executive Director and ushered in a new era of LESA’s growth. He was instrumental in developing LESA’s relationships with other continuing legal education providers, through LESA’s association with groups like ACLEA and the CBA’s International Initiatives. Paul F. Wood QC then succeeded Hugh Robertson in 2008, helping to expand access to LESA’s programs through our Access Bursaries, which offer registration discounts for those who have to travel long distances to attend in-person programs. Jennifer Flynn stepped into the role of LESA’s current Executive Director in 2013, and she has worked tirelessly to expand the availability and quality of LESA’s offerings – both in regards to our live seminars as well as our print and digital resources. One of the most significant recent developments LESA has seen under her watch is the launch of the LESA Library – a comprehensive, online resource – that was opened to the profession on September 30, 2015.

Although its responsibilities, functions, and mandate have evolved over time, LESA continues to maintain relationships with the various organizations involved in its founding. From the beginning, LESA’s Board of Directors has included representatives from other organizations that have an interest in the activities under LESA’s purview, including CBA Alberta, the Law Society, the University of Alberta, the University of Calgary, and other members of the legal community. LESA continues to work with the universities on some of our ongoing programming: the annual Constitutional Law Symposium is held in conjunction with the Centre for Constitutional Studies at the University of Alberta and the Intensive Advocacy program (which is going into its 34th year in 2016) is hosted at the University of Calgary. Our longstanding relationship with the Law Society now sees us deliver the CPLED Program (Alberta’s bar admission program) on their behalf. We also work with them to identify educational needs, including having Practice Advisors speak at our seminars, amongst other things.

Its original mandate tasked LESA with educating students-at-law and members of the legal profession as well as the general public. Today, LESA continues to focus on providing quality in-person education to the whole range of legal professionals – lawyers, students-at-law, and legal support staff – while also preparing quality resources, in both print and digital formats. In its early days, LESA contributed to public legal education by making its educational resource materials available to other organizations that played a role in educating the public. Through the years, other public legal education efforts involved contributions to a Calgary Herald column (“Legally Speaking”) and a program called Saturday Morning at the Law School (held in both Edmonton and Calgary), but by 1999, public legal education was removed from LESA’s mandate, allowing LESA to focus all of its resources on educating the profession.

The goal of helping practicing lawyers and their support staff refresh their knowledge and update their skills has been at the heart of LESA since the beginning. Even from the start LESA’s seminars have been highly valued by the profession: in 1976/1977 1,650 lawyers participated in our programs, by 1978/1979 that number had already climbed to 2,559 lawyers and 966 paralegals.

In the past few years, LESA’s program offerings have grown substantially, with approximately 3,700 seminar registrants attending an average of 40 distinct programs offered each year (most of which are held in both Edmonton and Calgary, with some programs held in other centres, such as Red Deer and Lethbridge). This year, in 2015/2016, LESA is offering over 45 live events, more than ever before!

While bar admission training has changed greatly over the years, one thing has remained constant: providing quality education for students-at-law has occupied much of LESA’s time and resources. Today, this training is offered as the CPLED Program, and LESA has several full time staff committed to the program delivery, assisting both the students taking the Program and the lawyers who provide the education in the online and face-to-face modules.

LESA’s first formal publishing venture was single volume Alberta Law for the 80s, a joint project between LESA and Butterworths that eventually turned into a 3 volume publication. By 1986 the publications program had grown large enough to require establishing a Director of Publications position. We have now sold over 5,600 books in our Practice Manual Series – not counting updates – along with thousands of other publications.

Since 2014, LESA has expanded its online resources in two significant ways:

There’s so much more we could say about what LESA is doing now and where we have come from in the past, but we’ll wrap things up by saying that we are forever grateful to the volunteers who generously donate their time, knowledge, and abilities to help make our seminars, CPLED Program, and educational resources run smoothly.

We hope you’ve enjoyed the trip down memory lane and learned a thing or two you didn’t know about LESA. Thanks for reading!